Abstract. We propose a method for determining the steady-state characteristics of a multi-channel closed queueing system with exponential distribution of the time generation of service requests and the second order Erlang distributions of the service times. Recurrence relations to compute the steady-state distribution of the number of customers are obtained. The developed algorithms are tested on examples using simulation models constructed with the assistance of the GPSS World tools.

Closed queueing systems are widely used as models to evaluate characteristics of information systems, data networks and queueing processes in production, transport, trade, logistics and service systems [1]. The closed system is also called the system with a finite number of sources or an Engset system.

Suppose that a queueing system with

The sources act independently of each other. The service time of a service request has the second order Erlang distribution. A service request, that is generated when

channels are occupied, waits in the queue.

To investigate the systems with Erlangian service times, in particular the M/Es/1/∞ system [2], the method of fictitious phases, developed by A.K. Erlang [3], was applied. The Erlangian service times of the second order means that each customer runs two service phases sequentially, the duration of which is distributed exponentially with parameters

The objective of this work is the construction with the aid of a fictitious phase method that is a recursive algorithm for computing the steady-state distribution of the number of customers in the multi-channel closed queueing system. We consider the system with an exponential distribution of the time generation of service requests and Erlangian service times of the second order. A similar approach is used in [4, 5], where recursive algorithms are developed for the systems M/E2/2/m, M/E2/2/∞, M/E2/3/m and M/E2/3/∞ as well as for the systems of the same types with threshold and hysteretic strategies of the random dropping of customers.

2. Construction of a recursive algorithm

denote the number of customers in the system. Based on the phase method, we introduce the following designations for system states:

signifies that customers are absent in the system;

signifies that there are

customers in the system

customers are at the first phase of service and

customers are at the second phase

. We denote steady-state probabilities that the system is in the states

, respectively. Then we obtain the following system of equations for determining these probabilities:

Recurrence relations (4) allow us to calculate

as linear functions of the unknown parameters

in the following sequence:

equations from formulas (2) can be used. The equations (2) have not been involved in obtaining relations (4).

Using the normalization condition (3), we find steady-state probabilities by the formulas

is the steady-state probability that

and the average waiting time

is a steady-state value of the arrival rate of customers, defined by the equality

is a characteristic of the system capacity, because for the steady-state regime, we have the equality of the intensities of flows of customers arriving and served.

Consider twentieth-channel closed queueing systems with an exponential distribution of the time generation of service requests and Erlangian service times of the second order for the following values of the parameters:

The values of the steady-state probabilities characteristics of the system, found using the recurrence relations obtained in this paper, are presented in Table 1 and 2. In order to verify the obtained values, the tables contain the computing results evaluated by the GPSS World simulation system [6] for the time value

Stationary distribution of the number of customers in the system

Stationary characteristics of the system

The numerical algorithm for solving a system of linear algebraic equations for the steady-state probabilities, proposed in this paper, is constructed taking into account the structural features of the system, in particular the presence of three or four unknown features in most of its equations. The obtained recurrence relations are used for the direct calculation of the solutions of the system, that allows us to reduce the amount of calculations in comparison with the case of application of one of the classical methods (direct or iterative). Using the obtained recurrence relations makes it possible to reduce the number of solved equations from 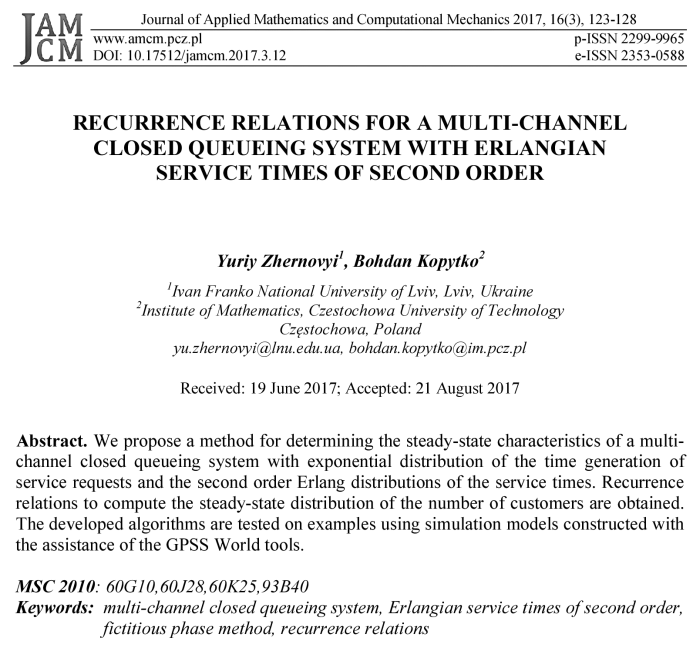